Alicia Douvall Plastic Surgery Before And After Butt, Boobs Photos

Alicia Douvall plastic surgery before and after butt, boobs photos have put on view here. Former English model and socialite who is obsessed with plastic surgeries was flaunting her surgically enhanced curves in Blue and White bikini in Morocco, during holidays with her youngest daughter Papaya. Earlier this, Alicia has admitted for having boobs job and butt job to enhance her curves. Moreover, she has also been confessed for getting a lot of cosmetics treatments due to her obsession with plastic surgery. You can see below of this passage “Alicia Douvall’s plastic surgery before and after photos” in which her plodding body measurements are flaunting frankly. But before that have a look on her personality and career that make her a celebrity and a victim of plastic surgeries.

Thirty five years old Alicia Douvall was born on 1st September, 1980 at Sarah Howes. She is the owner and founder of “Douvall’s Skincare Company”. While her relation with show biz is also along as she has been appeared in a number of TV shows, documentaries. One of her famous documentary show was in 2010 named “BBC Three Documentary Glamour Models”, “Mum and Me” and “Baby and Me”. Well later in 2015 she has been appeared in the Channel five TV show “Celebrity Big Brother”. In December, 2015 she released her first autobiography “Don’t Call Me Ugly”. 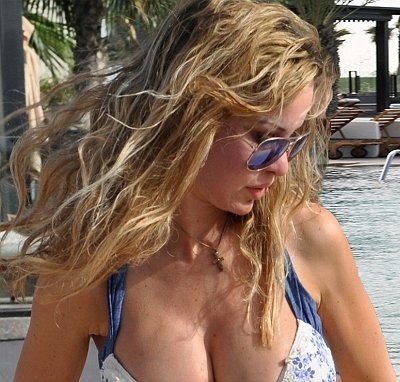 In this way, she has been raised her name and fame as an English Model, Reality TV Participant and the greatest plastic surgery shockers.

Alicia Douvall Plastic Surgery Before And After Butt, Boobs

As of a media report, it is congregated that “Alicia Douvall has spend estimated £1m for getting more than 300 plastic surgeries”. She has had various butt implants, breasts implants, Rhinoplasty and a number of cosmetic treatments due to her obsession with plastic surgeries. Like other celebrities Alicia doesn’t try to hide her surgery treatments but she openly confess all the works she has had with her body and face.

Recently a month back, she was worried of been killed due to leaking silicon from her surgical implants. She revealed on media that her X-ray report examined her implants are leaking silicon that could poison her. She told media that “she is suffering from pain in buttocks and couldn’t sit more than 20 minutes”. Mean while, the report about her cure from leaking silicon was not released but, on this Christmas 2015 holidays she has been captured in Morocco Hotel while enjoying sun with her daughter ‘Papaya’.

She was wearing blue and white bikini in which her surgically enhanced curves were flaunting. Her face with brown shades and golden natural locks was looking so fresh and cool as is could be noticed that she doesn’t have any type of tension about being killed of leaking silicon. Has Alicia Douvall had plastic surgery to cure her leaking silicones or she is still in pain. Well this story is not yet confirmed but you just keep in tuned with us because as soon as we get any latest news about Alicia Douvall Plastic surgery we will share with you here on this page.