Renee Kathleen Zellweger known as Renee Zellweger was born on 25th April, 1969 at Katy, Texas, United States to Emil Erich Zellweger and Kjellfrid Irene (her parents). Zellweger attended the Katy High School and then she attended the University of Texas at Austin. Zellweger was interested in drama performing so that is why during university she took a drama course as an elective, which initially sparked her interest in acting. Although Renee was attached with acting arts since her school life but her throughout acting career was begin in 1993 when she appeared in a horror movie ‘Texas Chainsaw Massacre’. Later that she was casted for a number of super hit movies and she maintained her name as an producer by producing a number of movies and sitcoms. Renee has also crowned with number of awards such as BAFTA Award, Golden Globe Award and Screen Guild Awards. Keep Reading now for examining about Renee Zellweger Plastic Surgery Before After Photos… 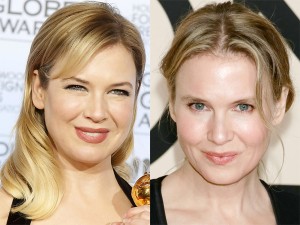 Renee Zellweger Before And After

Renee Zellweger has been captured for having plastic surgeries when she stepped out at the ELLE’s 21st annual Women in Hollywood Awards on Monday. The controversy was about her wrinkle-free forehead, cheeks and stout brows. Although Renee has never been acclaimed for having any plastic surgery but her facial features are not matching with her words. Her face was looking out of wrinkles, glowing and smooth enough which was sparking plastic surgery rumors. According to a plastic surgeon Dr. Alex Karidis of London’s Karaidis Clinic “Renee’s face is looking for having upper eye lift, he reasons: ‘the distance between her brow and her eye is much smaller than before’, Karidis added ‘her face is sparking blepharoplasty – you would expect more expressive wrinkles when she smiles which indicates a possible small dose of Botox’. Renee has been dismissed these speculations as ‘Silly’ and appeared somewhat tired and anxious as she ran errands over the weekend in Mississippi.

A week later to the ELLE’s 21st Style Award, Renee stepped out without a scrap of make-up for filming her latest movie “Same Kind of Different As Me”. She was still looking unrecognizable even without make-up. On the spot, Paparazzi asked her for having any plastic surgery, Renee climbed into her car, saying “Oh My God, You are going to ask me that question! Can You Excuse me Please? I have better things to do and I am sure you do too”. 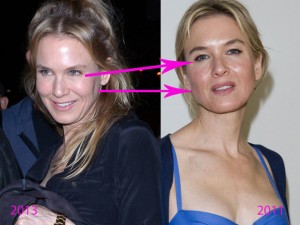